THE RE-DEDICATION OF ENGLAND TO MARY

"History shows us that when the people pray a surrender to God's will for their lives, society is transformed.

By taking up this personal dedication in 2020, you can be part of the renewal of this nation,

drawing ourselves closer to the will of our loving God, through Mary. 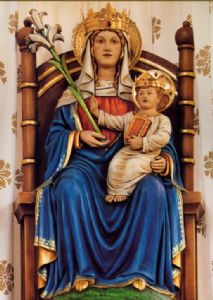 “Walsingham is one of the oldest shrines to the Mother of God; and in pre-Reformation times, it ranked with Jerusalem, Rome and Compostela as the most visited shrines in Christendom.”

The story of the Walsingham Shrine begins in 1061. Richeldis de Faverches, Lady of the Manor had a series of visions of Our Lady, who showed her the house in Nazareth where the angel Gabriel revealed to Mary that she was to be the handmaid of the Lord and that her son would become the Saviour of the world. Our Lady asked Richeldis to build a replica of the holy house here in Walsingham. It was founded at the time of the Crusades and English Christians were able to visit ‘Nazareth’ (England’s Nazareth as it became known) in their own country. Walsingham became a major shrine to Our Lady and a large monastery grew around it.

The title 'Dowry of Mary' (set apart for Mary) is said to go back to the time of St Edward the Confessor (1042 - 1066) and the deep devotion of English people to Our Lady that existed in medieval England. It was King Richard II who dedicated England to Mary in a ceremony at Westminster Abbey, in 1381, on the feast of Corpus Christi, in thanksgiving that his kingdom had been saved from the Peasants’ Revolt.

After many years of Catholic Suppression, the passage of the Catholic Relief Act in 1829 enabled Catholics to worship freely. Then in 1893, Pope Leo XIII asked the English bishops to consecrate their country to Mary, the Mother of God saying “When England goes back to Walsingham, Our Lady will return to England.” So, on the feast of Ss Peter and Paul, 29 June 1893, the Bishops of England and Wales, responded to the wishes of Pope Leo XIII and consecrated England to Mary, Mother of God and to St Peter. Pope Leo XIII also recalled the special devotion to St Peter, referring to him as the ‘principal patron’ of the country, and asked that devotion to these ‘two patrons of the faith’ and ‘guardians of all virtue’ be revived. The Pope believed that this would mark a new era and a new beginning for the Catholic faith in England

Our parish is registered to participate in this re-dedication. Check the Walsingham website at www.walsingham.org.uk

ENGLAND: THE DOWRY OF MARY, by Msgr John Armitage, rector of the Shrine of Our Lady of Walsingham

"When England returns to Walsingham,

Our Lady will return to England"